Frisco Style Magazine: A story about a woman helped by the AiRS Foundation, Asia Carter 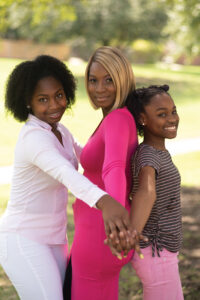 Partnering with AiRS was nothing short of providence for Ms. Carter. “I was on a plane,” AiRS co-founder Morgan Hare shares, “when the man sitting next to me asked what I did.” After Hare explained AiRS and their mission, the man told her about a former co-worker, Ms. Carter, who was battling breast cancer. Their company had been bought out by another company earlier that year, at which point Ms. Carter had been laid off and lost her insurance benefits. With two young children, a breast cancer diagnosis and uncertain insurance coverage, she had no way to pay for her treatment and reconstruction. The gentleman and some friends were helping cover some of Ms. Carter’s bills as she applied for jobs, but the looming reconstruction costs were a constant source of worry. “I told him to have Ms. Carter fill out an application and we ended up paying her insurance for several months so she could complete treatments and have reconstructive surgery,” Hare says.